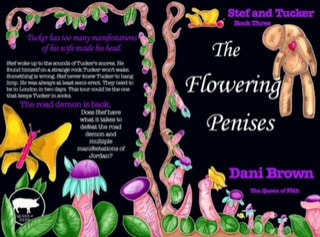 First published on 06 October 2021. See, Dani can make a book cover. She just needs some patience while she regains her graphic design skills.

The Flowering Penises is book three in the Stef and Tucker series.

There's too many manifestations of Jordan inside Tucker's head.

Stef woke to the sounds of Tucker's snores. He found himself on a strange rock. Tucker won't wake. Something's wrong. Stef never felt Tucker's soft cock before. Tucker was always semi-erect. They needed to be in London in two days. This tour could be the one that keeps Tucker in fresh jerk off socks. Stef tried to remember the drummer's Valium induced ramblings about road demons. He needed Tucker's man-juice to give him the brain power. He couldn't very well sample Tucker's cum if Tucker hung limp. Stef has to astral project inside Tucker's head to save them both. Jordan waits inside.