I know there's always going to be idiots who want to project their fantasies onto me, but here's something i posted on facebook and instragram earlier (16/11/18)... 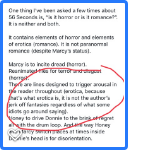 One thing I’ve been asked a few times about 56 Seconds is, “is it horror or is it romance?”. It is neither and both.

It contains elements of horror and elements of erotica (romance). It is not paranormal romance (despite Marcy’s status).

Marcy is to incite dread (horror).
Reanimated flies for terror and disgust (horror).
There are lines designed to trigger arousal in the reader throughout (erotica, because that’s what erotica is, it is not the author’s jerk off fantasies regardless of what some idiots go around saying).
Honey to drive Donnie to the brink of regret all with the drum loop. And the way Honey and Marcy switch places at times inside Donnie’s head is for disorientation.


Again, with the erotica, it is not the author's fantasy. I don't know how many times i've had this argument with people. At times, not getting this point across has proven outright dangerous. And I would rather not even have the argument because it is a total waste of my time and these days it is triggering a stress-related reaction. I've been getting approached by creeps. I know there's more than one reason behind this but one that really frightened me was another author. He couldn't grasp that just because I write sexual things, it doesn't make me a sexual person. I am, very openly, not a sexual person. Not like it is anyone's business anyways. And if i was, I still shouldn't have to deal with creeps who can't comprehend that erotica is not the author's fantasy. No author should be punished for their books. No means no. And no means no the first time. The police shouldn't have to get involved because whoever has approached should back the fuck off upon hearing that no.