chester and lester. a tale of two brothers and their start-up companies. 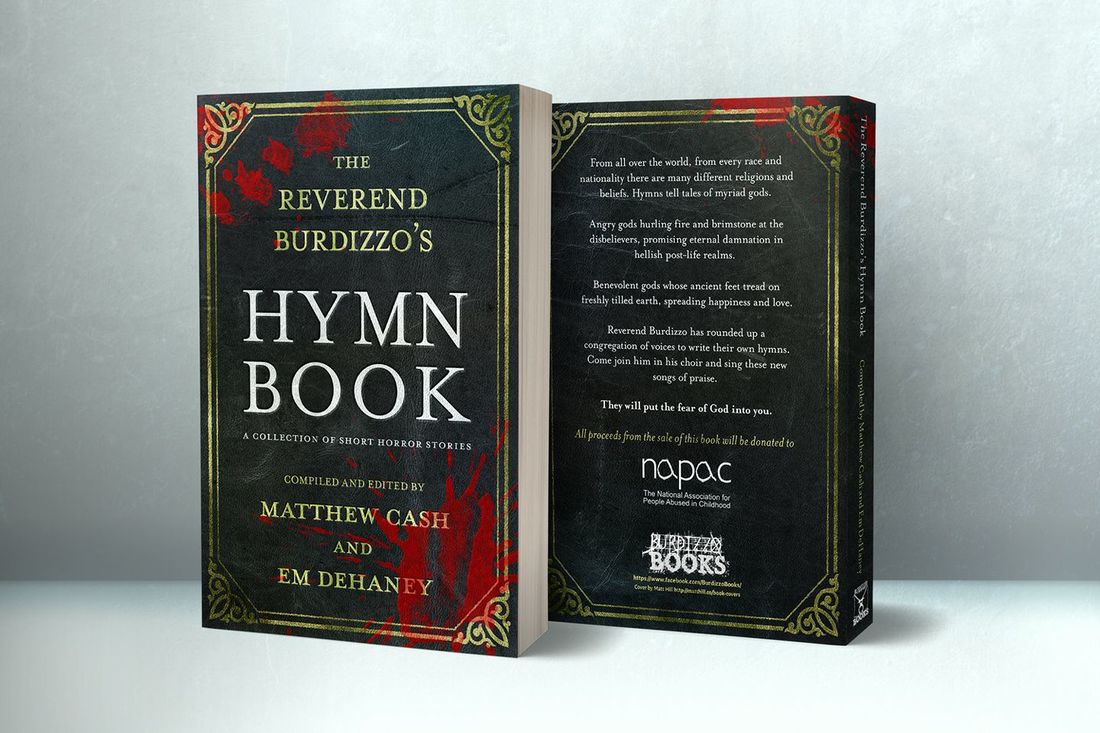 you're here for the rejection letters, aren't you?

Lester's Electric Milking Machine didn't go down too well at the vicarage.

Dear Ms. Brown,
It is with regret that the Diocese of Burdizzo must write to you again regarding your latest submission to the Parish newsletter. While we appreciate the effort you must have gone to, writing such a unique and enlightening piece of fiction (I must say that in all my years in the habit, I have never come across a man who cries tears of male ejaculate, and you would be surprised at the men I have come across) you must immediately cease and desist sending The Reverend this filth as it gets him too excited and the only way to calm him down is a good anal scourging, in the name of The Lord of course. The flagellation is exhausting, not to mention the amount of altar candles we go through is astronomical and the church only has limited funds, as I’m sure you can appreciate Ms. Brown.
As such, while the spermagrammatical adventures of those spunky brothers Lester and Chester may be of interest to some, and believe me Ms. Brown despite the wimple I am no prude, I would ask that if you insist on inflagrating The Reverend’s loins with such titillating turpitude that you be the one that comes to the vicarage to apply the ointment. I am far too busy with the needs of our flock to be administering salve to The Reverend’s particulars. Plus, there is only so much communion wine I can drink before The Verger notices it is going missing. It’s the only thing that gets me through the long nights, listening to The Reverend praying so very loudly in his quarters. At least I think he’s praying. He shouts ‘Oh, God!’ quite a lot, and I’m sure I hear him splashing holy water up the walls.
There is also the small matter of your entry into the Burdizzo Bake Off, which many of the parishioners found entirely too salty. The judges couldn’t decide if it was meant to be lemon drizzle or a bakewell sponge, but the icing certainly was creamy and The Reverend went back for a second helping he enjoyed it so much.
Sincerely,
The Black Nun

P.S. The Big Burdizzo Bring and Buy sale is just around the corner, so if you are able to bring along some that fantastic cloudy ice of yours, it always goes down so well.

Neither did the first version of "Bind Us Together" (now re-named Chester's Cloudy Ice)...

Reverend Burdizzo
The Little Lost Church
On The Pier At The End Of The World
Walsall
West Midlands
April 13, 2017
Dear Ms. Brown,
First of all let me express my thanks for your story submission ‘Bind Us Together’, the time you must have taken will never be replaced, neither will the time I spent reading it.
Secondly I would like to offer my commiserations that myself and my publication house will be unable to publish your submission in our anthology ‘Reverend Burdizzo a HymnBook’. There were numerous reasons for the piece not making the grade, and as I believe that every upcoming writer should have constructive critique I will happily point out the main reasons. Before that I would like to say that your writing, descriptive narrative, grammar and style is, as far as I can see, faultless. But that is the only nice thing I can say about your submission.
Your story, basically is about a man who has grossly enlarged testicles which need relieving numerous times a day. He is a keen pornographer housing what is believed to be the largest and most extensive collection of pornography known to mankind. He even has categories people have never heard of. As if a story of a chronic masturbator is a disrespectful enough to send to a publisher of religious texts and pamphlets, you have to add intricate details as to what he does with his ‘doings’. Whilst I'm sure there are more exotic ingredients used in the preparation of food around the world I myself am a meat and two veg kinda guy, and I don't need to read about semen being used in any kind of culinary purposes.
As I said, upon receiving your submission I was overjoyed that you had titled it after one of my favourite Hymns. I was expecting maybe a tale of a religious couple, perhaps a series of interesting, humorous and even poignant, snippets of their long lives together and how they were bound, by God, together in holy wedded matrimony. But no.
No. No. No. Instead you decide to publicly release my own life story but just call me by a different name. At least you never referred to me as a Reverend in the story too. The similarities between the main character and myself are identical and it wouldn't take anyone who knew me long to figure out your story was about me. I have a congregation to run, they can't know anything about my extensive pornography collection, especially the ‘Dr Doolots’ Animal Kingdom’ series of snuff films I myself personally starred in. And if ever they saw the ‘Choir Practice’ video starring myself and my beloved Black Nun, we would be ruined. As to my resourceful ingredient that I add to most of my recipes at the church's coffee mornings every other Friday, well you would be disappointing a lot, A LOT, of satisfied housewives if they found out my secret additive. My food wins prizes Ms Brown, I can't jeopardise that or my other career because of your ‘close to the cuff’ story.
I would like all evidence of this tale, any correspondence between myself and you, including the photos of us together in the pantomime horse costume, to be destroyed and not shown to anyone. As agreed I have enclosed the cheque your requested, and my recipe for my own special clotted cream that you love so much.

Reverend Burdizzo
P. S See you at church on Sunday, put the egg in before the semen this time, NOT during.

To read the published version of Bind Us Together, please visit www.amazon.com/Reverend-Burdizzos-Hymn-Book-ebook/dp/B071J37MNL/

The Black Nun has her own facebook page too, www.facebook.com/emdehaney/

And none of us would be here without the Rev www.facebook.com/pinprickbymatthewcash/

“I’m outta here.” Lester and Eloise heard him leave.
“Okay, I know this seems crazy, but think of Tesla. Focus all your attention on Tesla while looking through the mirror. Not at it, but through it. Like there’s another world on the other side.”
Lester sat on one side of the coffee table. Eloise sat on the sofa.
“You have to sit on the floor.”
She moved down, implanting her arse on some lipstick and various handbag debris. His balls twinged as he took her hands.
“Ready?”
She shook her head for yes.
“Okay, now, focus. Tesla. Calling Nikola Tesla.”
Lester’s balls began to fill. He took a deep breath and stared at the mirror.
“Tesla. Are you there?”
The curtains fluttered, even though the windows weren’t open. He felt Buddette lift her head.
“I’m here, Lester. I’ve been watching you closely. Great inventing. You and your brother. I know you don’t like him much.”
“Can you put this to right?”
“Under one condition.”
The stereo boomed ten seconds of a love song.
“What’s that?”
“You and your brother stop competing and start working together.”
Chester didn’t really leave. They heard him go outside. He listened from the bushes, wishing his brother would open the windows. He heard Tesla’s remark though. Lester drew in a breath.
“He wouldn’t want to work with me. He’s a cocky little arsehole.”
“Anything to get the power back on!”
Lester heard his brother run from outside. Little bastard was listening in.
“Don’t worry bro, I won’t put your girlfriend in my movies. Anything you say.”
“Fine,”
Lester agreed through gritted teeth.
“Together, you two can take over the world.”
The lights flickered. People outside cheered. Lester imagined their necks craning up. Nikola Tesla manifested from the mirror. The candles blew out and they were plunged into darkness. Lester balls ached.
One full minute later, everything came back on again. Love songs blared from the speakers.
“Your taste in music was always awful.” 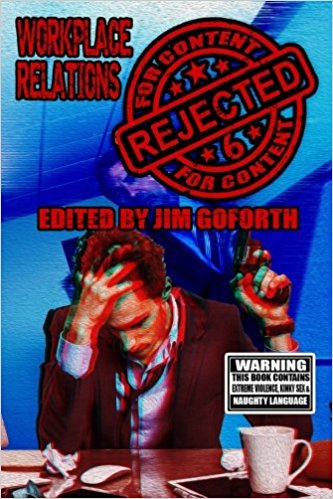 Rejected for Content 6 is the home of Bind Us Together, which has since been re-named Chester's Cloudy Ice. To purchase your copy, follow the link to amazon https://www.amazon.com/Rejected-Content-Workplace-Jim-Goforth/dp/1977941915/ 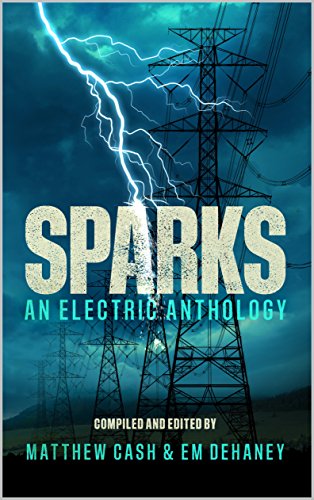 Sparks, featuring my story "I'm Your Electric Man" is out now. It doesn't include "Lester's Electric Milking Machine". Follow the link to amazon for your copy https://www.amazon.com/Sparks-Electric-Anthology-MATTHEW-CASH-ebook/dp/B0764H1T2P/

Keep watching this site for the spunky adventures of Chester and lester.

Chester's Cloudy Ice, popping into a story near you soon.