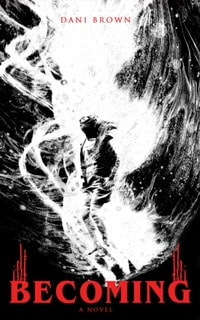 Becoming was released on 3 February 2020 by Death's Head Press, just before the global pandemic saw the world put under house arrest. This one is connected to 56 Seconds, although they both stand alone. It is the story of how Marcy died. It is extreme. It is brutal. If you want both the story and the experimental then buy the paperback. It is worth the extra few days. Kindle unfortunately lost some of the formatting. It still has the story though. Much like Ketamine Addicted Pandas, 56 Seconds and Sparky the Spunky Robot, kindle and paperback aren't linked on amazon because amazon has a stick up its anus. So type Becoming Dani Brown into amazon's search and you'll find it. Becoming is also available for kindle unlimited. If you are in the USA, consider buying from the Death's Head Press website instead. They do stickers and things.

This is the story of how Marcy died…Legs swollen shut. Propelled into darkness and misery. One date wouldn’t hurt. Borderline insecurity. She wasn’t allowed outside. Pleasure eluded her in an endless loop. A fist against the wall. Robotic shapeshifting demon from Mars. A fever threatened. The aching suck of the Void.