sparky is filled with love. 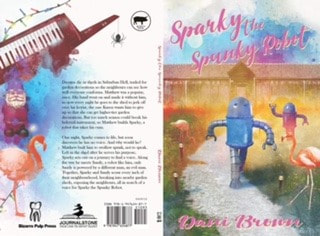 Published by Bizarro Pulp Press, part of Journalstone on 22 February 2019. This book was written in October 2017 but published after Crack House in the Desert (what Dani wrote next) and 56 Seconds (what she wrote after that). If you ask nicely, she might show you her robot tattoo.
​
Dreams die in sheds in Suburban Hell, traded for garden decorations so the neighbours can see how well everyone conforms. Matthew was a popstar, once. His band went on and made it without him, so now every night he goes to the shed to jerk off over his keytar, the one Karen wants him to give up so that she can get higher-tier garden decorations. But too much semen could break his beloved instrument, so Matthew builds Sparky, a robot that takes his cum.

One night, Sparky comes to life, but soon discovers he has no voice. And why would he? Matthew built him to swallow spunk, not to speak. Left in the shed after he serves his purpose, Sparky sets out on a journey to find a voice. Along the way he meets Sandy, a robot like him, only Sandy is powered by a different man, an evil man. Together, Sparky and Sandy scour every inch of their neighbourhood, breaking into nearby garden sheds, exposing the neighbours, all in search of a voice for Sparky the Spunky Robot.

Amazon is being a bitch and hasn't linked the kindle and paperback formats, but it is available in both and for other e-readers. Just type Sparky the Spunky Robot into the search bar.