Better late than never. Era two started in early/mid-March of 2018, a few months after New Years and my bottle of gin after ten years of constant stress and having to write in secret while the rest of my creative skills were lost to people either expecting me to be a social worker (i'm not, I won't ever be) or have horrible problems and because I didn't have problems people decided to give me some problems instead. I'm writing this in October of 2018, one day after Seth's birthday (11 years yesterday). If you've been following along on social media, you've been seeing the progress made. Era Two is everything I thought writing and creating would be when I left university ten and a half years ago. I had the idea for a story about a pop band that only sing about masturbation while drunk at a party. However, in early 2018 my life was such a mess, as much as I tried to write the story, it wasn't happening. I somehow managed to write Crackhouse in the Desert in January/February and apparently it is a really good book, but I don't remember a thing about it (I actually have a print copy to refer to when I upload promo for it). One weekend I was messing around with the early days of era two. By this point there were three ideas. One extreme (pop band is sexually assaulted repeatedly and constantly abused by a series of producers). One fun (all the songs are about masturbation). One about sexbots (The Dream Princess range). I wasn't getting anywhere with anything. In February of 2018 I attended an EBM night at Sanctuary Bar in Liverpool. I was there early. Real early. After ten plus years of constant stress, I'm in a lot of pain (the stress first showed up as attacking my body when I first returned to the UK at age 16, it started in my toes, easy to dismiss as a ballet related injury) and I can no longer dance (hoping to be able to again one day). I do like to sit and watch though. It was my first night out since New Year (I still remember that hangover, it lasted days). I sat nursing gin and tonic at a table in the back of the room. I've taken a lot of creative liberties with Sanctuary in 56 Seconds. The cracks are part of the decoration (see my social media) and the glasses are clean. Obviously with the glasses, the fingerprints belong to either Marcy or Honey. And well, here's a picture I took. And again a few months later at a Liverpool Horror Club Event. 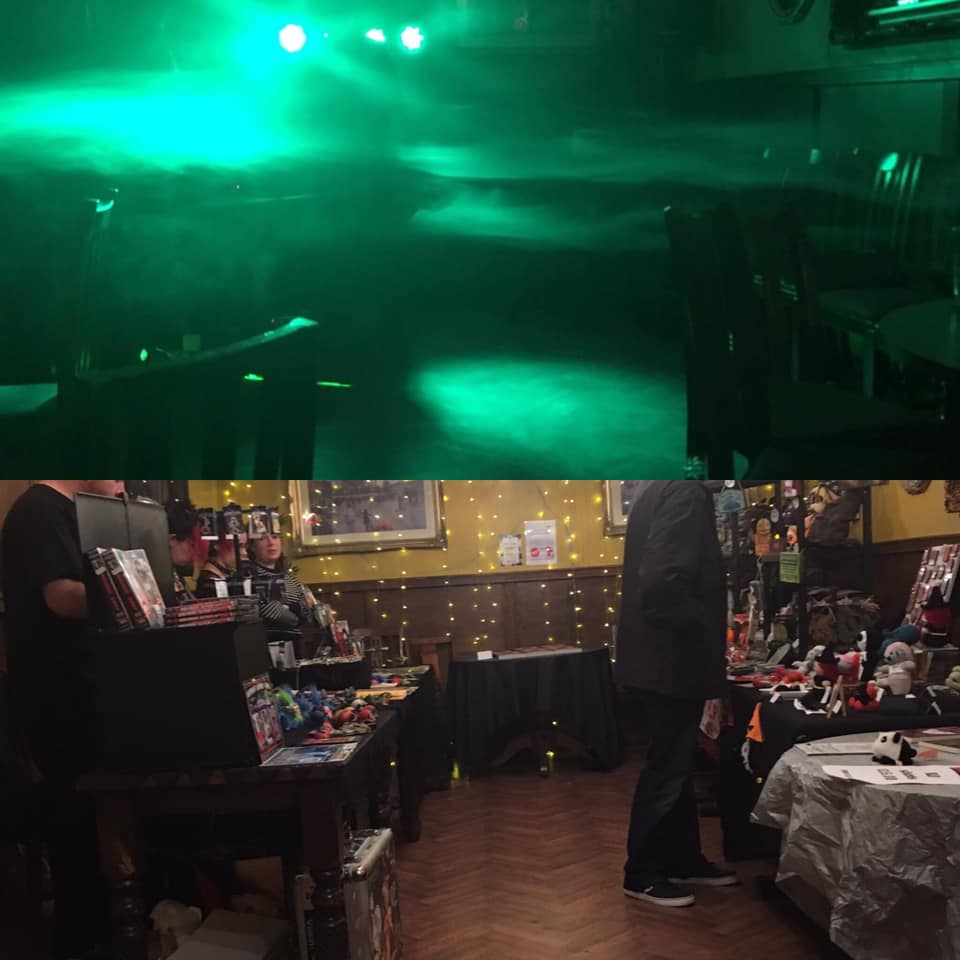 If you are in Liverpool, it is totally worth checking out.

From mid-Feb to early/mid-March, I continued playing around with the first few stories. The stress was slowly leaving my body and mind after ten years of fighting (I've covered a lot of that in previous interviews, on this website and all over social media). I wasn't getting anywhere though (don't worry I still have the notes and all three stories will be a part of Era Two). Then one Saturday morning I woke up to an anthology invite. The story had to include a dragon. Everything started to click into place and there's sexbots in my story. The anthology is due for release in February of 2019. My story is titled The Last Human. A few days later, it became story one of Era Two. 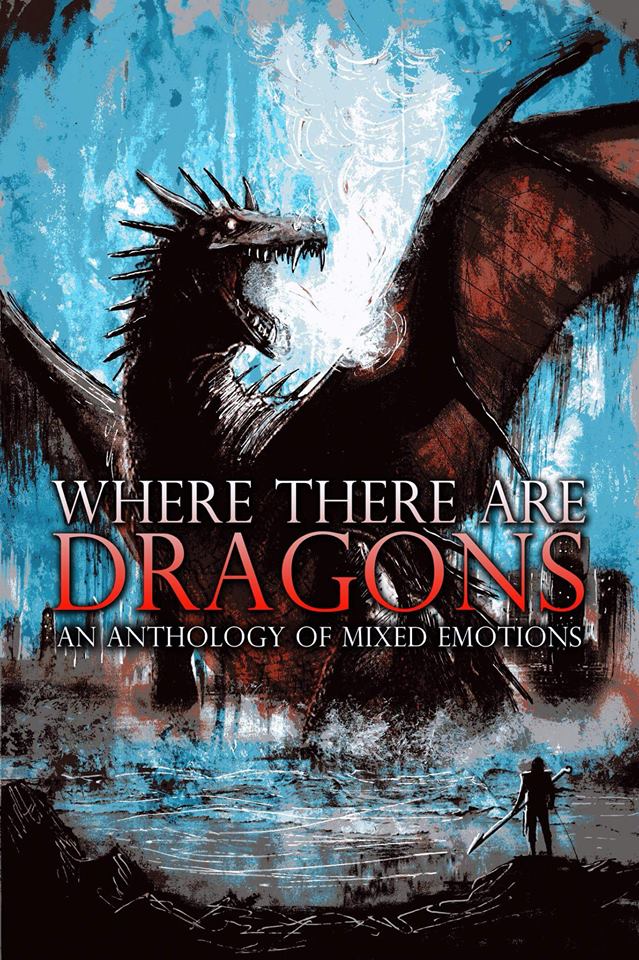 I wrote my story on the Saturday and proof-read it on the Sunday. I liked the concepts explored in it. Within the next few days I had the start of 56 Seconds. I had a few anthology invites for 2018. I think I intended a little break with short stories while Push the Button/Smothered Hope/Dream Princess clicked into place. 56 Seconds didn't want to be a short story. I threw briefs out of the window. After so long of writing to submission guidelines, it felt liberating. The stories started to flow in the same way they did at university. Way back when I thought my mother was unique with a unique set of problems and they were so rare I wouldn't come across anyone else like her - I was a bit wrong for ten fucking years and although I don't hate people, I have a really fucking long list of things to watch out for relating to acceptance and attention seeking as well as socially competitive behaviour as I seem to be a magnet for people like her. I don't usually write from life, but following medical advice, I've been using my long list in these stories and creating characters around it. I did try to do that in Reptile, but at the stage of writing that, I still had a lot of those sorts of people throwing themselves at me (If you're here because of the Year's Best Hardcore Horror 3, Reptile is the book you are looking for, or if you met me at an event and want to read the most extreme thing ever, every page has something super horrible, you can get the amazon link from the Books section of this website or on my facebook page in the pinned post). 56 Seconds was written after I cleared out a lot of these people and made it very clear I did not like them, I did not want them in my life. It has evolved from Reptile to become more mature. 56 Seconds was why I spent ten years of my life fighting to be allowed to do what I wanted with my life. I shouldn't have had to fight. It should have been a given. Although I experienced a glimmer of what life could be like while writing "Sparky the Spunky Robot", I did end up with the inspirational robot (not actually Sparky, although I call the red one Sparky and the black one Sandy) tattooed on my forearm (if anyone wants to pay to have Sandy tattooed next to him, contact me). I also had it at the beginning of writing Crackhouse in the Desert. Life could be good. I could be happy.

While writing 56 Seconds, over the course of those two weeks (it only took about two weeks!!!), I was scrolling my Instagram page and came across a screenshot of when a creep left loads of comments on everything I posted up to that date (May 2017). The screenshot was about my kissable eyes (included below). I posted it on my facebook page (the personal, yet public facing one as the Queen of Filth page doesn't get much reach and I refuse to use paid advertisements). Facebook turned it from kissable eyes to licking eyeballs and I can't thank everyone enough. And that's how eyeball licking came to be in these stories. 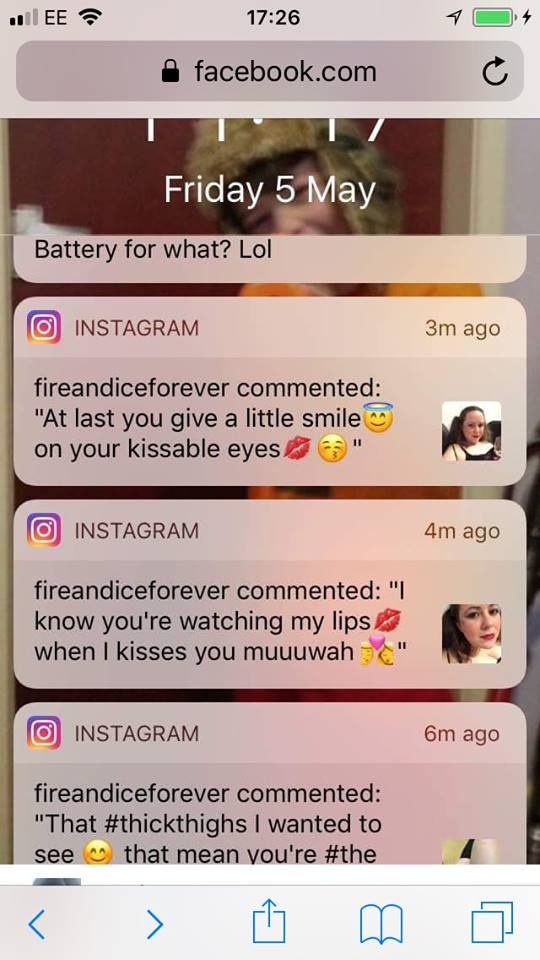 Keep checking here, follow along on social media which gets updated near enough daily. I don't have any deadlines or set plans for the era two stories. Most of them are going in on slushpiles. Some will be super-hard to place and may take a few rejections before I get the market right. Obviously, if you are worried about Ketamine Addicted Pandas, Seth or Stef and Tucker, these transcend Era One. Ket Pandas is what I call a bridge story. Seth is from the before. And Stef and Tucker is pure, filthy fun. I'm sending Era Two everywhere from Big Five to tiny indy, super hard to find presses. I will also be uploading one of them to Patreon at one point and one here. Good luck getting copies of all of them. 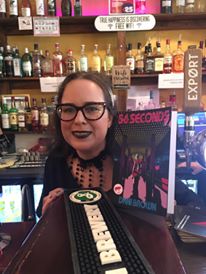 behind the bar in sanctuary. If you can get to Liverpool, the bar is near lime street station. check them out. see the room that influenced 56 seconds and have a gin and tonic (in a clean glass).