The First of the Month

Dani Brown, the Queen of Filth has been using Amazon's royalty counter to watch Britain collapse (let's face it, at this stage, it isn't just the economy). This obviously only works if you buy her self-published titles (although please pick up some of her other books available on amazon while you are there). Queenie will usually tell you to pick up e-books from godless where they're a) cheaper and b) pay her more but godless lack an estimated royalty counter. So, at the beginning of the month, could you purchase her books from amazon.

The Stef and Tucker series is noticeably absent from this list. Due to the small amounts involved in payment for these books, Queenie can't tell how much the British economy has tanked with sales of these ones. All five are available on godless, but if you want paperbacks, you can buy them here.

Also missing is Broccoli. This one was self-published through Lulu, although the Queen of Filth can still see kindle sales on the amazon royalty estimator, she can't see paperbacks and Lulu is a pain in the arse to bring up that information on. You can buy it on godless.

The Queen of Filth still hasn't worked out how to track the tanking economy with Redbubble, but don't let that stop you buying prints and other merchandise with penis-birds. 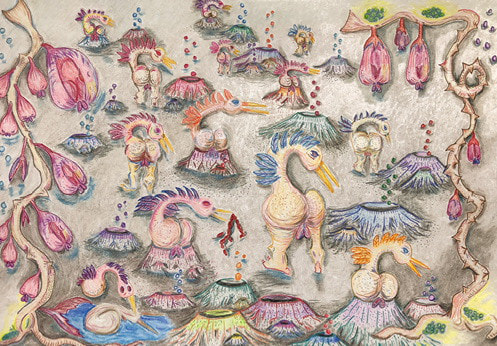