an end of an era?

What can I say, I'm not a fan of Tarantino (i'm still not sure if I'm spelling that right). Way back in college, we had to watch ALL of his films, or the ones out at the time. I don't get why film students go so crazy for him. I especially don't get why college tutors and university lecturers go so crazy for his films. They should know better. I have special hatred for Pulp Fiction. Up there in my top ten least favourite films of all time.

Flotsam and his Electric 'tache was written while I was under immense stress. I was being hounded and pressured into doing something that I didn't want to do. I stood my ground. Was totally disregarded and had my boundaries crossed and another holiday ruined, but I didn't have to do what I was being pressured into doing. Reading through the edits, it was much better than I remembered. A story I can be proud of. There's no moral lesson. No hidden meaning. It expressed what I was trying to do within my writing at the time of writing it - just write a fucking simple, single layered story.

Gingerbread. This was written at the lowest point in my life. Constant stress. Shaking uncontrollably. I thought I was shaking due to blood sugar reasons. I wasn't it was stress. Every time I'd start shaking, I'd eat and I gained an awful lot of weight to the point I couldn't walk up the stairs without breaking a sweat and struggling for breath. I was considerably upset about my weight. I couldn't breathe! I was ruining my clothes and couldn't afford to buy new ones. Instead of support to lose the weight (I lack will power and love cupcakes), I had a lecture about body confidence. Body confidence is all well and good for people with medical reasons impacting their weight. That wasn't my case. Eventually I did lose the weight. I kept my dieting pretty close to secret though. I needed support and didn't get any. I ended up with the extreme opposite of support. Pressure to do things I didn't want to do, didn't moralistically agree with, having bad shit that happened to me a long time ago used as the reasons for why I didn't want to do moral questionable things, deadlines stacking up, my dreams and goals getting lost underneath people constantly pissing on my boundaries at any rate. I had been cyberbullied by a Satanist hiding behind a computer (or smartphone). Normally, block and delete. I don't care about other people's opinions of me as long as it doesn't compromise my safety, my family's safety or our privacy. She had been rubbing me the wrong way for years on top of everything else I was going through. I snapped and pulled down the Anton LaVey books from the top of the bookcase. I don't typically have problems with Satanists and I've obviously read LaVey (his sense of humour is rather inspirational). I latched onto the bit in the Satanic Witch about tying used tampons around your neck (there's more to it than that, if you're curious, you'll need to read LaVey or ask an actual Satanist) and went from there. No one was listening to me. The one person who could have put a stop to the cyberbullying didn't want to know, was incredibly dismissive and basically didn't care. Rubbing more salts in the wounds. I wrote following medical advice to start including some of my emotions in my stories. I'm getting better at that now, but this was an early attempt. I'm a pretty private person, although as my mental health declined, I started to be more open about what I was feeling and what was causing it. And that formed the basis of Gingerbread. Due to what I was going through at the time, I didn't feel I had a good story. Projections of the negativity of a bunch of people trying to out-narc each other on social media basically. people I wanted to escape from but they kept being thrust into my life. I wrote God's Fleshlight as a reaction to not thinking I had a good story (see Dual Depravity 2 below). Going through the edits for it though, I read the entire thing. I didn't skim through. I sat there and read it, expecting a really shit story. It was amazing. it was like reading it for the first time. So much better than imagined. You can preorder Repulsive Tales A Splat Anthology now. As I'm having tech problems, you'll have to get the link from facebook.com/danibrownbooks 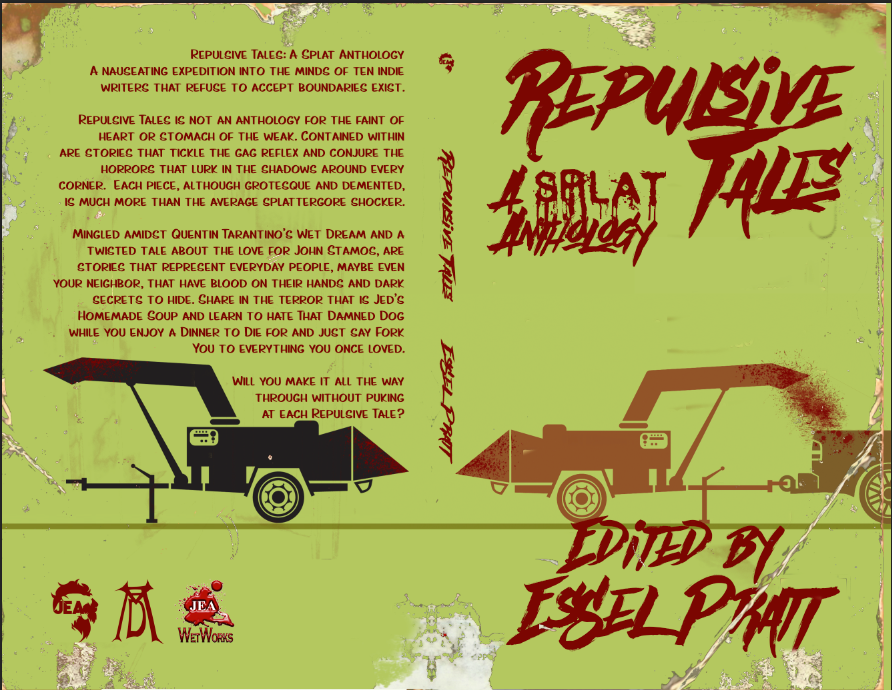 Here's Circle Jerk, my story from Splat 2 https://www.amazon.com/Splat-2-John-Ledger-ebook/dp/B01KKAOXY8/ Answering the question you've always wanted the answer to, What happens if only straight men show up at a swingers club? I honestly have no idea, so I made up something. Again, what you can expect from Queen of Filth era one. Shallow and no hidden meanings. No apologies. If you're interested in my newer multi-level stories, I've been posting about them over on  facebook.com/danibrownbooks and tweeting them over at @danibrownauthor. I will upload a webpage eventually.

Missing here, my story from the first Splat, Go Fuck Yourself. I mentioned tech problems on this page once. I have the story. I have it on another laptop and two memory sticks. This piece of shit laptop won't open the memory sticks anymore. I hope to have a new Mac within the next month (if you have a problem with my choice of computer, I have a special story where I'm dissolving penises of the people that piss me off, I'll save you a space, seven years of Microsoft and I've reached my breaking point). I will upload that as soon as I can. In the meantime, check it out in Splat www.amazon.com/Splat-John-Ledger/dp/1517212480/ 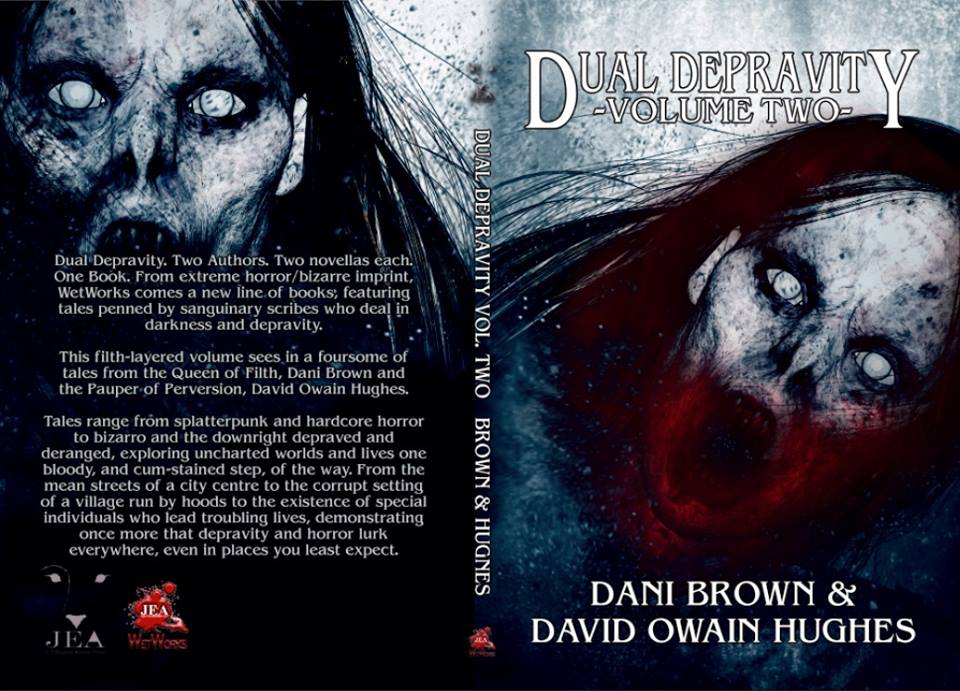 get your copy of dual depravity 2 from amazon now www.amazon.com/Dual-Depravity-Wetworks-Presents-Book-ebook/dp/B07C1SYZ2X/

I've included Splat 3 and Dual Depravity 2 together for a reason. My two stories, The Previous Plastic Surgeon and God's Fleshlight link to stories in Splat and Splat 3.

The Previous Plastic Surgeon. It follows Jerusalem in his quest to perform plastic surgery on the ugliest women he can find. I had a boyfriend once. He was always checking out other women and talking about how he is going to invite a friend over and they'd probably have sex. I never came across anything like it before. Needless to say, it didn't leave me feeling very secure and well, contributed to my feelings of worthlessness. The Previous Plastic Surgeon was my reaction to that. I still kept my distance emotionally. This story was written many years ago. Go Fuck Yourself in Splat links up to it as he was always looking in the mirror. So many mirrors, everywhere. Now, I know conceit. I'm rather fond of how I look, but this again, surpassed anything within my experience.

God's Fleshlight. Me trying to improve Gingerbread. After re-reading Gingerbread with all the toxic people gone and my mental health in recovery after all of that, I loved it. Maybe you won't like it. Maybe you'll prefer God's Fleshlight. Or love them both. Or hate them both. Being in recovery, I've recovered my older more experimental genre bashing style and combined it with medical advice to write within my own emotions and I've added multiple layers of social commentary. God's Fleshlight has a practice layer of social commentary in it. Only one deep. So a surface layer and then another layer beneath it. I had cut out the bulk of the toxic people but was still traumatised while writing it. I couldn't go too deep. It is, probably one of my more disgusting stories. I was really trying to catch that Broccoli-high. I didn't achieve it with this. Queen of Filth era 2 (Tainted Love/Push the Button) and it is like being stoned in the best possible way every time I sit down to write. God's Fleshlight really sees out the end of an era in the best possible way. It was the last era one story I wrote (I think, my life was a total mess at the time and memory is still jumbled)

Thank you for joining me on this journey. I think there's still a few more era one stories to be published. Then there's Ketamine Addicted Pandas and the bridge story between one and two (both due out in 2018). Queen of Filth Era two (the entire group of stories is being called Tainted Love/Push the Button, read about 56 Seconds in my latest interview) is stronger, happier, weirder, grosser and much deeper. Who knows what the future holds? Hopefully the most emotionally detached piece of writing ever.